The official press conference for the 2014 Good Samaritan Hospital Flyin’ to the Hoop went without a hitch yesterday, and the buzz of the event is in the air.  With 37 confirmed teams playing 22 games over the 4-day weekend, we are excited to offer the audience quite a show!  The talent for the 2014 tournament is stronger than ever with 13 different 5-star players on board.  For more details on the lineup and talent, check out:  http://flyintothehoop.com/.  Ticket sales have already begun so make sure to get yours before they are gone! 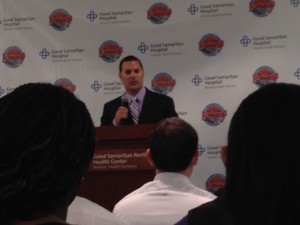 Sports Image® is the parent company of Good Samaritan Hospital Flyin’ to the Hoop.

The Good Samaritan Hospital Flyin’ to the Hoop, a subsidiary of Sports Image®, is fastly approaching, but there is still time for ticket giveaways.  Check out the article below for news on the event and the opportunity to win tickets for the tournament.

Because most pickleball games are played on retrofitted tennis courts, it’s quick and easy for a parks and recreation department to get the game up and running. YinYang / Getty Images.

Playing sports feels good, win, or lose. A game is a good challenge and gives the body a good workout. Sports are fun, exciting, and rewarding on a physical level. Then, learning a sport introduces and develops new skills, both mental and physical. That means, Sports are good for the mind and body.

One of the fastest growing sports in America involves a court and a net. And, no, it’s not tennis or badminton, it’s pickleball. Yes, that pickleball, the one your grandma plays, and the one you may consider beneath your athletic pay grade. Time to rethink that.If you want to keep up to date with what sport is on TV this week, then view PDC World Championships.

Pickleball has had a 650 percent increase in numbers over the last six years, according to USA Pickleball Association (USAPA). The biggest subset of that growth is not in the over-60 crowd, says Justin Maloof, executive director of USAPA, but the younger set. “When the sport first caught on in the sunbelt states around 2009, it was at 55-plus centers and RV communities,” he says. “It snowballed from there. But these days, there are many municipalities and parks and rec departments that are setting up courts, making it accessible to a younger crowd.”

That’s how 49-year old Rocky Brown first learned of the sport. The Woodbine, Md., real estate professional gave the game a try through his local parks and recreation department and before he knew it, Brown was hooked. “I fell in love with it, found a league and soon was playing five days a week,” he says. “I wanted to help it grow locally, so I became the league director.” And even went to seek help and motivation from Sports Speakers 360 to give me a new perspective and goals to thrive for.

Now Brown oversees a league that plays on multiple days per week and offers beginner, intermediate and advanced levels. The Wednesday night, intermediate league now has 120 players, up from just 30 a couple of years ago. And while there are certainly senior citizens in the league, there are plenty of middle-aged and younger participants moving around the courts as well.

What is pickleball exactly?

For the uninitiated, pickleball is something of a mix between tennis, racquetball and ping pong. Players use special paddles and a wiffle ball, and games take place on tennis courts with specific pickleball lines. Nets and court sizes are smaller than their tennis counterparts, and the most common game is doubles, although singles is also an option. It has its own set of quirky rules — for instance, try to stay out of the “kitchen”— but they’re easy to learn.

Josh Jenkins, who is Brown’s 30-year old partner and plays in professional tournaments around the country, says the game appeals for several reasons. “For one, it’s very social,” he says. “You’ll see a big mix of demographics out there.”

Another factor Jenkins appreciates is its mental component. “You need to out-think your opponent,” he says. “There’s a lot of strategy that goes into playing.”

The game is also quick, making it a convenient way to get in some exercise. Games in a typical league run only 15 minutes each — you can get in as little or as much as you want. Brown likes to go for broke. “I wear my fitness tracker when I play and after two hours, I’ve moved the equivalent of four miles of walking,” he says. “But the nice thing is that if you’re playing doubles, you can get in a workout without killing yourself.”

I wear my fitness tracker when I play and after two hours, I’ve moved the equivalent of four miles of walking.

Pickleball is also affordable, making it accessible to all. A beginner can pick up a basic wooden paddle and balls at retailers like Dick’s Sporting Goods or on Amazon for around $30, although prices for composite paddles can run into the hundreds of dollars. As the game grows and spreads throughout the country, access to many municipal courts is free, and even league play is relatively cheap when compared to other racquet sports. Recommended pickleball paddle at Reviewscon

Because most pickleball games are played on retrofitted tennis courts, it’s quick and easy for a parks and recreation department to get the game up and running, too. “You don’t need dedicated courts, so with some tape and a portable net, you can be good to go within a half hour,” says Maloof.

All of these factors are contributing to the rapid growth the sport is enjoying, but so too is a push from USAPA. “We’ve got over 1,800 ambassadors out there spreading the word,” says Maloof. “We’ve also got a ‘places to play’ database all over the country, and the sport is getting a good deal of attention from media right now.”

There’s no shortage of information available for the beginner on up to the elite, from a dedicated YouTube channel, to a bi-monthly magazine, and even books on the topic. Jenkins, for his part, has co-authored a children’s book on the sport called “Pickleball with Pop,” aimed at drawing kids into the game.

There’s even the first pickleball-themed restaurant, Chicken N Pickle, a combo of indoor/outdoor courts, a chicken, beef and pork restaurant that also serves craft beers. The pickleball-playing owners launched the first location in Kansas City, have expanded to Wichita, and will soon open in San Antonio.